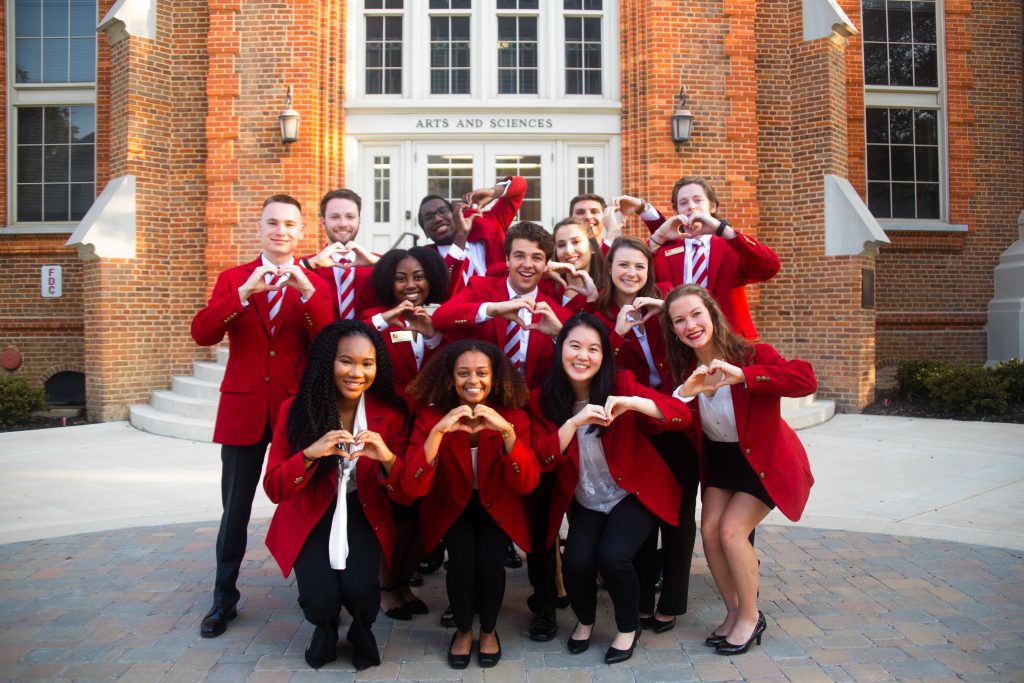 The Ambassadors began as a vision of Mrs. Susan Halliday with funding for the famous red blazers approved by Dean James D. Yarbrough in October of 1998. An application process was quickly developed and after interviews by a committee from the Dean’s Office, twenty-four Ambassadors were selected to represent the College of Arts & Sciences. Their first duty was to assist in the recruitment of the new students at Capstone Scholars Day in January of 1999. Thus, the tradition of excellence by example began.

Since their founding, Ambassadors have been selected from an elite and diverse group of applicants in the spring semester of each academic year. In the fall of 2001, Dean Robert Olin became the faculty advisor and with Mrs. Halliday’s support the Ambassadors were organized into an officially-recognized student organization by the University and the Executive Board was appointed. This first Executive Board, led by President Andrew Todd, worked to draw up a constitution for the organization, declared the intended functions and goals of the Ambassadors to the University, and worked to publicize the group on campus and in the community.

The Ambassadors continue to be actively involved in the College. The Ambassadors work with Dean Joseph Messina and their advisor, Dr. Pamela Young. They participate in over 100 interest session each year sharing with prospective students and parents what it is like to be a student at UA. They also serve as peer mentors and organize community service projects in and around Tuscaloosa. Other activities the Ambassadors participate in, as they interact with alumni, faculty and donors, include the Leadership Board meetings, Faculty BBQ, Pre-Football Game events, Family Weekend, Homecoming, the Opera Gala, Faculty Receptions, Special Dinners, the McCollough Pre-Medical Scholars Forum, Science Olympiad, Arty Party, Honors week and Graduation events.